This week the Phoenix modern rock quartet No Volcano turned a few heads when they made a handshake agreement to have their music distributed by Onus Records, the world’s first deliberately designed non-profit record label. Under this arrangement, the group retains all money collected from the physical sale of its albums while Onus can continue to earn no moneys from the band by giving away digital singles of the group. 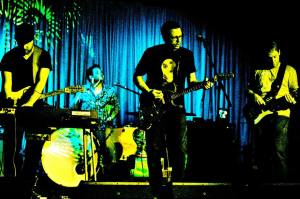 “It’s a honor to have No Volcano on the label, ” says Onus founder and CEO Tommy Globbit. “Trunk Federation cast a long shadow across the Phoenix music scene and I’m confident No Volcano will do the same.”

Says No Volcano’s Jim Andreas, “We met at Tommy’s house and realized we were each other’s kind of people over beer and Triscuits. So we’re terribly proud to be the first rock band to kick off Sunnyslope’s first soul label in four decades.”

Although hands have already been shaken, the band will recreate this event for cameras and public alike when Onus Records officially launches with a Launch Party and Press Conference. Although No Volcano will not be performing that night, they will be showcasing their videos “Tribute” and “New York Drugstore.” Both tracks loom large on the bands upcoming debut album, “Who Saved The Party?” Onus will release the album on February 3, 2015. Performing after the press conference will be Serene Dominic and the GemSeekers, The Bittersweet Way, The Breakup Society and Man From Bland.
Before forming in 2013, Chris Kennedy (drums) and Jim Andreas (guitar/vocals) were in one of Phoenix’s most exciting bands of The Nineties, Trunk Federation, who were signed to Ali 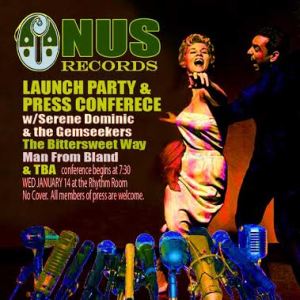 as Records, home of Archers of Loaf, Yo La Tengo, Small and Knapsack.
No Volcano unites the heart and soul of that band with Jeremy Randall (guitar/keys) of Colorstore and Jake Sevier (bass). And they’ve wasted no time, opening shows for The Radar Brothers, Quasi and Jacco Gardner and garnering accolades from the Arizona Republic and Phoenix New Times.To read more about No Volcano and Onus Records, read this recent writeup from Phoenix New Times.
http://blogs.phoenixnewtimes.com/uponsun/2014/12/onus_records_launches_with_motown-inspired_songwriting_model.php
Here’s is their video for “Tribute”
https://www.youtube.com/watch?v=wY7KfFBbFII
No Volcano are:
Jim Andreas: Vocals and Guitar
Chris Kennedy: Drums
Jeremy Randall: Guitar, Keys
Jake Sevier: Bass
Toggle Sidebar
Loading Comments...