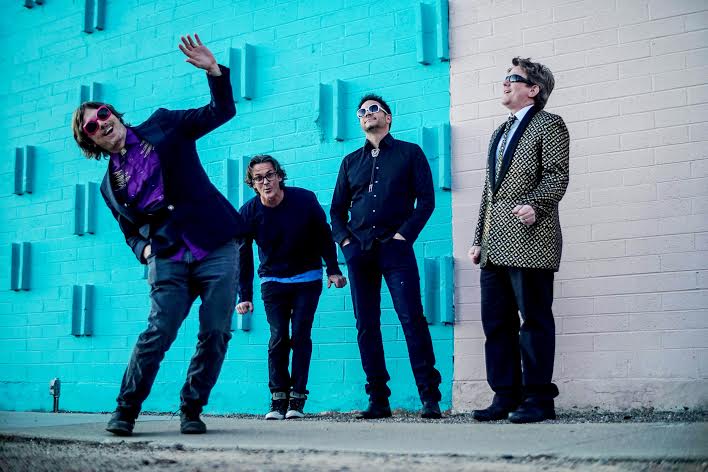 Not a band to rest on its laurels, No Volcano has unleashed a second music video from its fourth album “Rubber Dagger, ” well in advance of the November 30 CD release show.

Onus Records is proud to be the first to present this video for “Golden,” a standout track on the new album featuring a vocal guest spot by singer/songwriter and Giant Sand member Lonna Kelley.

The video was filmed and directed by Luke Malone of Alone Wolf Pictures and edited by Jason Willis who directed “Extrovert,” the first video from Rubber Dagger.

With Rubber Dagger, Jim Andreas, Chris Kennedy, James Karnes and William Goethe have carved out a fourth musical go-round that might be No Volcano’s most poppy, hurly-burly meisterwork yet!

Its none-too-subtle send-up of the Fab Four featuring our fab forefathers on a mind-bender may be a sly comment on our country’s current craven tumult. On closer examination, Rubber Dagger offers takes on every slice of life you can expect in  2020 America. Our divisive nation can be dissected along two dueling party lines, “Extrovert” and “Introvert,” both of which the group has conveniently provided vibrant theme songs for. “Extrovert”  previews the album with a new video by director Jason Willis, who crafted the band’s previous videos for “Blackout” and “Day in the Sun.” Our social media disconnection is also duly noted on “Logged In”  as is the end of civility in our national discourse in “Negative Attention.” Even the abandonment of space exploration, once a source of civic pride, is dashed in songs like  “Rocket” and “Lines in Space.”

But all that is bubbling below the surface. This is first and foremost a pop album, possibly the best No Volcano had produced yet. If this were a more enlightened time, No Volcano would be considered a singles band and wear it like a badge of honor. The Beatles allusion on the cover can be vaguely felt musically in the group’s sunshine harmonies and economical song lengths—only two songs crest over three minutes and No Volcano crams a lot of information in what the group likes to call “miniatures.”  You may decry the lack of a middle eight  in a favorite album track that ends too soon but Rubber Dagger is harmonically programmed so each song neatly dovetails into the next, even if  you scramble the album running order (and No Volcano is  fully aware that an album’s sequence is tampered with mightily once it is imported into iTunes, and for this reason they issued their second album in alphabetical order!).

In short, Rubber Dagger is the most flexible yet sharpest precision tool you’ll ever own! You can stream and download it today from Onus Records or if you are one of those holdouts of the whole tactile, hold-it-in-your-grimy-hands sort of person, please come and but physical copy of thealbum at No Volcano’s CD release party at Valley Bar on Saturday, November 30 with special guests SNAKE! SNAKE! SNAKES! + JJCNV

This week the Phoenix modern rock quartet No Volcano turned a few heads when they made a handshake agreement to have their music distributed by Onus Records, the world’s first deliberately designed non-profit record label. Under this arrangement, the group retains all money collected from the physical sale of its albums while Onus can continue to earn no moneys from the band by giving away digital singles of the group.

“It’s a honor to have No Volcano on the label, ” says Onus founder and CEO Tommy Globbit. “Trunk Federation cast a long shadow across the Phoenix music scene and I’m confident No Volcano will do the same.”

Says No Volcano’s Jim Andreas, “We met at Tommy’s house and realized we were each other’s kind of people over beer and Triscuits. So we’re terribly proud to be the first rock band to kick off Sunnyslope’s first soul label in four decades.”

Although hands have already been shaken, the band will recreate this event for cameras and public alike when Onus Records officially launches with a Launch Party and Press Conference. Although No Volcano will not be performing that night, they will be showcasing their videos “Tribute” and “New York Drugstore.” Both tracks loom large on the bands upcoming debut album, “Who Saved The Party?” Onus will release the album on February 3, 2015. Performing after the press conference will be Serene Dominic and the GemSeekers, The Bittersweet Way, The Breakup Society and Man From Bland.
Before forming in 2013, Chris Kennedy (drums) and Jim Andreas (guitar/vocals) were in one of Phoenix’s most exciting bands of The Nineties, Trunk Federation, who were signed to Ali

as Records, home of Archers of Loaf, Yo La Tengo, Small and Knapsack.
No Volcano unites the heart and soul of that band with Jeremy Randall (guitar/keys) of Colorstore and Jake Sevier (bass). And they’ve wasted no time, opening shows for The Radar Brothers, Quasi and Jacco Gardner and garnering accolades from the Arizona Republic and Phoenix New Times.To read more about No Volcano and Onus Records, read this recent writeup from Phoenix New Times.
http://blogs.phoenixnewtimes.com/uponsun/2014/12/onus_records_launches_with_motown-inspired_songwriting_model.php
Here’s is their video for “Tribute”
https://www.youtube.com/watch?v=wY7KfFBbFII
No Volcano are:
Jim Andreas: Vocals and Guitar
Chris Kennedy: Drums
Jeremy Randall: Guitar, Keys
Jake Sevier: Bass
Toggle Sidebar
Loading Comments...