How do you steel yourself against a random universe that seems determined to turn you into an accidental killing machine?

SHERI AMOURR, the director who brought you such live downtown stage musicals as The Goblin King’s City, A Swimming in the Head and Rocky Horror at the Firehouse, joins forces again with SERENE DOMINIC (writer of A Swimming in The Head) to bring you DARK LULLABY, a new musical based on the 1945 film-noir classic Detour, even though Dark Lullaby’s story arc goes from the mid 1970s to the late 1980s, leaving plenty of room for stylistic musical genre-hopping, from rock to rap to disco to filter in.

The show stars SKY DONOVAN as young Tom Reynolds was a once-gainfully employed guitar player trying to get to the West Coast to reunite with his actress girlfriend Joanna, played by RIVA FIGUEROA. See SHERIDAN WOOD as the femme fatale Lyndetta, determined to derail Tom at all costs and actor/rapper JOOBS as Roscoe Des Moines, the man of means who inadvertently sends Tom off on his downward spiral to the electric chair.

Then thrill to ASHLEY NAFTULE in a dual role as Warden Crosley, the man who tries to keep Tom on the straight and narrow and Mr. Sunniver, the sleazy casting director out to out ME TOO Joanna. Also in a dual role is ERNESTO MONCADA as Mr. Punabi and Father Merv. RYAN AVERY portrays Riley, the son of Mr. and Mrs. Bill Fishoff, (PARKER MORDEN & VERONICA MONICA) whose power and wealth can and will turn the whole town of West Patagonia against Tom! Guiding them on their rendezvous with vengeance is ABIMAEL MONTES GUARDIOLA as Psychic Bobby, the telepathic bounty hunter from Wichita Falls

The show will premiere Saturday, June 9 at the new Trunk Space’s Hope Hall (where Catholic masses are held in its less homicidal moments). Showtime is at 8 PM. For advance ticket to this first show, click here.

The second performance will be on Father’s Day night, Sunday, June 17 at The Film Bar, a natural place for a film noir musical to come full circle! Showtime is 8 PM. For advance tickets for this 2nd and final show, click here. 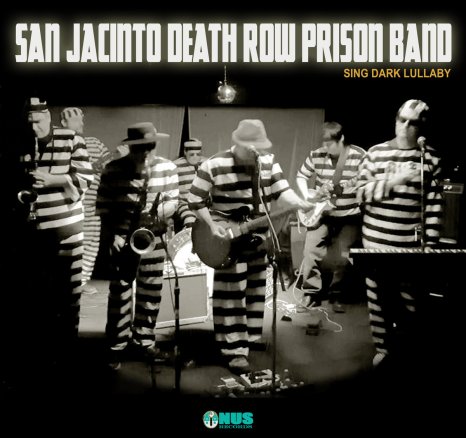 For Serene Dominic, the music from the show has taken a few twists and turns. Originally it was an album he released  in 2016 on Onus Records as he was writing the show. This year, San Jacinto Death Row Prison Band released Sing Dark Lullaby and performed nine songs from the show on it.  The remaining Dark Lullaby songs will be issued on a San Jacinto Death Row Prison Band EP this fall. The band has been making club and bar appearances well before the Dark Lullaby premiere, including a CD release show at The Lost Leaf on May 18.

A full cast album of Dark Lullaby  featuring the voices of the actors with San Jacinto Death Row Prison Band playing behind them, will be issued by Onus Records at the premiere show at Trunk Space on June 9.