0n December 5 & 6, 2015, The Firehouse Gallery in downtown Phoenix will present the new height challenged musical comedy “Swimming in the Head,” with a book and a musical score by Serene Dominic and direction by Sheri Amour and Ting Ting, the same team that brought Phoenix audiences “Rocky Horror at the Firehouse” this past spring.

The score that formed the bedrock of the show derives from a 2010 Serene Dominic album called “Unnatural Blonde” which was a song cycle written to match the 1957 Alfred Hitchcock movie classic “Vertigo” song for scene. “It was probably my favorite movie so I thought why not get a “Dark Side of the Wizard of Oz” thing going?  The idea of doing it as a musical came two years later, mostly because I had no desire to watch the actual movie without the original Bernard Hermann score. By then this had morphed into someting a bit different. The book has dialogue from the movie script in places but it’s a lot siller. I mean, how are you going to convey a fear of heights on a stage 14 inches above the ground?”

That’s just one of the many challenges directors Amour and Ting face in staging this suspense and music  production. Says Amour, “I hadn’t seen it in many years when I was approached about doing it, but I was very intrigued to see what Dominic had done with it. We have a lot of work to do in getting the set designed, and most importantly, having our cast perfecting the songs and scenes. We have a talented and charismatic cast and a very resourceful stage crew. This is going to be something very special.”

“My excitement for the production itself has grown with some of the liberties we’re taking, with our casting choices, and with the spin Serene Dominic has put on the classic film. I’m nutty for musicals and Hitchcock, so this was a natural interest for me and I think everyone is going to enjoy their experience both nights. We have some interactive segments so there is a strong possibility of seeing a different show either night. I am rearing to raise the dead alongside Sheri and hope to turn out the Firehouse  once more.”

The cast album will feature vocal contributions from Joe Sawinski, Sara Griffin, Margo Brookover, Joobs and Serene Dominic, who will act in the show as well serve as musical director. Marcella Grassa and Jill Louise are the two narrators of the show so  having two women retelling the story gives it a radically different spin, so to speak.

“Much of the drama and suspense needed in the show  is built into the musical score,” says Dominic. “I think the real theme of the songs and the show isn’t the murder or agrophobia angle but the question of whether man and a women can go back into the past and somehow fix it, change the outcome of a doomed love affair. Who can’t identify with that?” 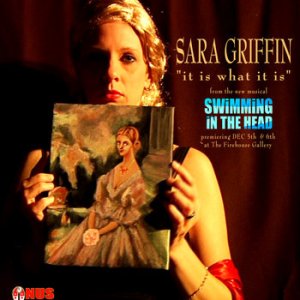 The ‘Swimming in the Head’ Deluxe Edition Album is available for digital download from Onus Records and contains the entire Serene Dominic “Unnatural Blonde” album from which the show was based plus six new cast recordings. Onus has also made several tracks from the show available for free download through its popular  Single of the Weekend series. This week the song on release will be “It Is What It Is” which is performed by the show’s female lead, Sara Griffin. Physical CDs will be available at the show’s Merch Boothand from the Onus Bandcamp website.